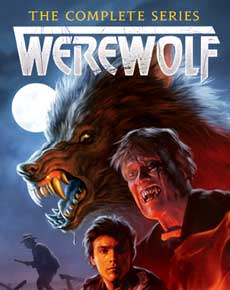 Werewolf was a rather short-lived thriller/horror series that aired from 1987 to 1988 on the Fox network’s inaugural debut.  The show starred John J. York as Eric Cord, a college student transformed into a werewolf, and Chuck Connors as Janos Skorzeny, the drifter who first turned Eric’s roommate into a werewolf.  Initially the show aired as a 2 hour pilot, and then ended with 28 half hour episodes.

In the show, Eric’s roommate Ted is a werewolf killer who gets infected himself.  Handing Eric a gun full of silver bullets and asking Eric to kill him, Eric is bitten by Ted before the deed was done.  After turning into a werewolf himself, Eric is then on the run from the law for Ted’s death, on a quest to find the elusive Janos Skorzeny, the originator of the werewolf bloodline.  If Eric can kill Janos, then his werewolf curse can be broken and he can return back to normal.  During his travels, Eric managed to only feed on criminals, villains, and bad folks while in werewolf form.