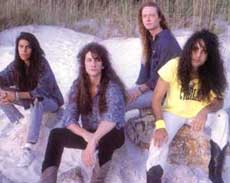 The Christian metal band Angelica, not to be confused with the all-girl, British punk rock band, formed in the late 1980's.  Angelica was the brainchild of Canadian guitarist Dennis Cameron who signed a record deal with Intense Records and picked up Rob Rock on vocals (from the band Implellitteri, Joshua, M.A.R.S., and others).  Angelica's first release (self-titled) came out in 1989 and it was produced by Ken Tamplin (a talented musician in his own right).  Tamplin actually does vocals on one of the songs.  The album art credits another vocalist for the album, but indeed it was Rob Rock on vocal duties after the original singer left (with the exception of the one Tamplin song).

By 1990, Rob Rock had moved on and Angelica had a new singer (Jerome Mazza) for album 2, and then changed vocalist again (Drew Baca) for their 1991 release.  Angelica was a talented band that we have been enjoying for years.  Any current band activity was unknown at the time of this writing.

The Angelica Discography is as follows: