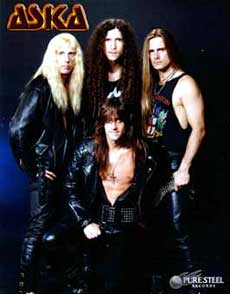 ASKA was a heavy metal band that hailed from Dallas, Texas.  They formed as a band in 1990, a bit too late in the game to make any real impact on the dwindling metal scene, and released their first studio album in 1991 (self-titled).  The band was known for controversial subject matter in their lyrics, tackling subjects like war, religion, and history.

ASKA’s style was a bit more raw than many metal bands starting out in the 1990’s, which may be one reason why they were sought after on the touring scene and continued to be active well into the 2010’s.  Some have compared their style to that of Judas Priest, and we would tend to agree in some ways, especially considering the vocal range of the singer.

At the time of this writing, the ASKA Discography was as follows: