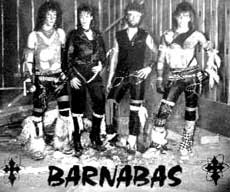 Barnabas was a Christian metal band that started in the late 1970's (in California) and is considered by many to be one of the forerunners of Christian metal.  The band is unique in the fact that they had a female vocalist.  They recorded their first album, titled Hear the Light, in 1980.  By 1983, the group had landed a record deal, and three more albums resulted.

The band itself not only relocated multiple times during its existence, but so did many of the band members.  This inconsistency, along with the unfounded criticism they received from televangelists’ like Jimmy Swaggart, ultimately resulted in the band's demise by 1985.  Their last album was contractually released in 1986 (Little Foxes).

The Barnabas Discography is as follows: