Polly Pockets were little pocket sized plastic dolls released by a company called Bluebird Toys in 1989.  Each figure came in a little pocket-size case and was about one inch tall.  Polly Pockets play sets featured sunken ships, castles, restaurants, stables, etc  By the early 1990’s, Mattel had bought Bluebird Toys out, and although Mattel continued producing Polly Pockets well into the 1990’s and beyond, they differ in size and appearance from the original (the Mattel version is taller, made of a pliable plastic, and comes with rubber clothing accessories).  By the 2000’s, there were Polly Pocket movies, video games, and even a TV series in the 2010’s. 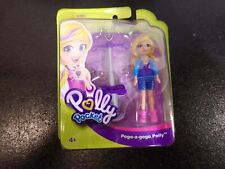