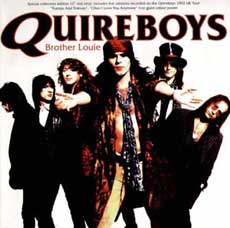 The London Quireboys were a British band that formed in 1984 as the Choirboys.  They would first change their name to the Queerboys, then the Quireboys, and then later to the London Quireboys, which is the name they were known as in the USA (it turned out that the name Queerboys did not go over real well in some places).  The band released their first album, A Bit of What You Fancy, in 1990.  This album featured the hit songs “7 O’Clock”, “I Don’t Love You Anymore” and “Hey You”.  The band toured in the USA with groups like L.A. Guns and Soundgarden.

VINTAGE 90s The London Quireboys Music Poster Flat Promo A Bit of What You Fancy
$4.99