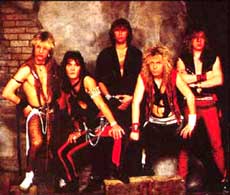 Madison was a short-lived metal band that came out of Sweden in the mid 1980's.  The band was basically the evolution of another Swedish band called Regent that had released a single ("Lay Down Your Arms") that was subsequently re-recorded by Madison with vocalist Göran Edman at the helm.  Madison's first release was Diamond Mistress in 1984.

In 1986, Madison released their second album with Edman on vocals (Best in Show).  After Edman packed up, Madison brought in a new vocalist, but the band soon dissolved into the history books.  Madison's album doesn’t necessarily stand out from other metal bands of the mid 1980's, but that is not necessarily a bad thing.  Edman's vocals are good and the music was well polished.  The Madison Discography is as follows: