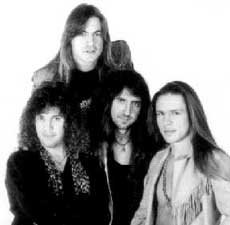 Lord Tracy was a metal band that formed in 1985 in Tennessee.  The band released their first album, Deaf Gods of Babylon, on the MCA label in 1989.  Some of you may remember the song “Out with the Boys” from this album, which reached no. 40 on the Mainstream Rock Chart in the USA.  After an extensive tour to support the album, tensions reached a boiling point in 1991 and the band broke up.

In 2004, Lord Tracy reunited and continued their activity on and off well into the 2010’s.  The band’s new stuff is still hard rock, but much different than their 1989 release.  Lord Tracy is known for their jovial and light-hearted lyrics.  The Lord Tracy Discography is as follows: