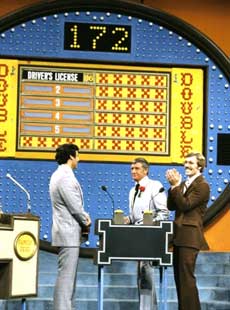 Family Feud is one the longest game shows to be featured on this site.  It first began in 1976, and was still in syndication at the time of this writing in the late 2010's.  As far as the 1980's, the show ran from 1976 to 1985 with Richard Dawson as the host, and from 1988 to 1994 with Ray Combs as the host.  With the exception of the ever-increasing raunchiness of the questions asked, the format of the show hasn't changed much over the years.  It is worth noting, however, that some old shows featured contestants showing their talents (playing a violin or cello for the audience, for example).

The premise of the show was simple.  5 contestants from two different families teamed up against each other to win cash and prizes.  Contestants would try to guess the answers given by survey contestants.  For example, a question that was asked in the survey might have been "name something you can always use more of", and the answers that the contestants would have to guess would be things like "money", or "time".  If a team member could not guess an answer, they received a strike.  After three strikes, the opposing team could take over.  After 3 rounds, the family team with the most points went on to the "Fast Money" round, where two family members would answer 5 survey questions in 20 and 25 seconds respectively.  If the sum of their answers was at least 200 points, they won the grand prize.

It is worth noting that Richard Dawson was the consummate gentleman, and it appeared all the ladies had a certain affection for him.  He would give all of the ladies special attention, kissing them all on the cheek, regardless of their age, gender, etc.  It might have had something to do with the character he played on the TV show Hogan's Heroes (Newkirk).