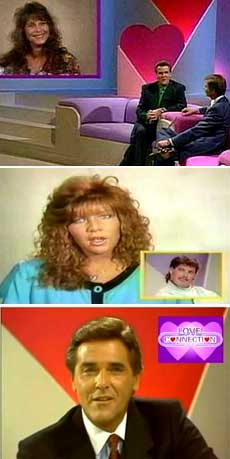 Love Connection was a show that ran from 1983 to 1994 and featured Chuck Woolery as the host.  All in all, the show ran for more than 2000 episodes, with a short-lived reboot in 1989 that featured Pat Bullard as the host.

The premise of the show was simple.  Single would attempt to connect with a compatible partner of the opposite sex, after watching three video profiles, and then go out on a date with the person they picked.  By the time the contestants appeared on the show, they had already been on the date.  After the live audience viewed the original video profiles, the rest of the show was dedicated to finding out how the date went.  Prior to finding out how things went, the audience would even vote on which candidate they felt would be the best match.  If the date went well, the contestant would be offered a second date, either with the person they choose from the first show, or the person the audience chose if different than the original person.