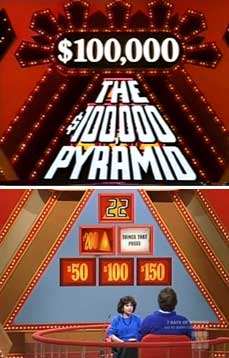 The show featured two contestants, each paired with a celebrity, who tried to guess a series of words or phrases based on clue words given by the celebrity.  For example, if the word was "nurse", the celebrity would give the contestant clue words like "doctor", "hospital", "syringe", "uniform", etc. in hopes that the contestant would say "nurse".  The name of the show was in reference to the pyramid shaped game board that featured 6 categories (3 on the bottom, 2 in the middle and 1 on top).  The contestant ahead after the first round would move to the Winner's Circle, where a number of words would have to be guessed in 60 seconds to win the cash prize.  There were different variations of this depending on which version of the show was being played, but the concept remained the same.