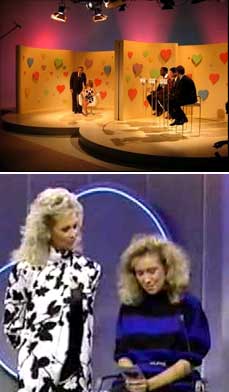 The Dating Game was a long running "game show" that first hit the airwaves in 1965.  As far as the 1980's go, the show ran from 1978 to 1980 (hosted by Jim Lange), and then again from 1986 to 1989 (hosted by Elaine Joyce).  The show was basically about a bachelorette (normally) who would ask a panel of three, hidden bachelors a series of questions.  She would then make her bachelor pick based on the answers she received.  It was not your traditional gameshow in that there were no cash prizes, but instead a paid-for date with whichever bachelor the bachelorette picked.  Certain questions were off limits, such as salary, age, occupation, and things of that nature.

There were tons of stars that appeared on the Dating Game before they became famous, such as Farrah Fawcett, Tom Selleck, Lee Majors, Andy Kaufman, Suzanne Summers, Steve Martin, Burt Reynolds, John Ritter, Phil Hartman, and even Arnold Schwarzenegger.  Some stars even appeared after they were famous, like Michael Jackson, Ron Howard, Sally Field, and Richard Dawson.