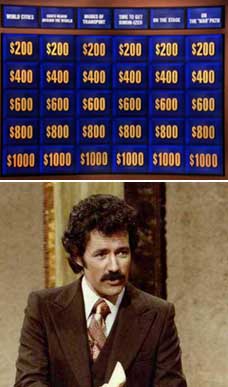 The show features three contestants who would solve a clue in the form of questions.  Sounds confusing, but to illustrate, the game board would have six categories, each with 5 clues.  The player would pick a category and a clue by dollar value (the higher the value, the harder the clue).  An example category would be something like "American Poets", and the clue would be "he wrote O Captain! My Captain!"  The correct answer from the contestant would be "Walt Whitman".  Two rounds were played like this, and the final round would be a single question, whereby the players would write down their answer and risk money from their pot.  The contestant with the most money after the last round won the game and returned for the next episode.