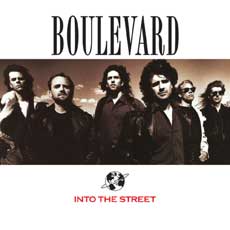 Boulevard was a rock band from Canada that formed in 1984.  The band’s first single, titled “Rainy Day in London”, was a success in Europe, which effectively launched their career.  In 1987, Boulevard landed a record deal with MCA/Universal, and the band’s first album, titled BLVD, was released in 1988.  You may remember the songs “Never Give Up” and “Far from Over” from this album.  The band went on tour with Glass Tiger and Boston in support of their album.

In 1990, Boulevard released the album Into the Street, which contained the singles “Crazy Life” and “Lead Me On”.  They disbanded shortly thereafter, but did come back together in the 2010’s for a reunion tour and a new album (release date unknown at the time of this writing).  If you like AOR rock bands like Refugee, 707, and the Storm, then you will like Boulevard.  The Boulevard Discography is as follows: