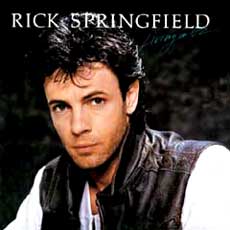 Richard Lewis Springthorpe starred on General Hospital, Wonder Woman, in a movie called Hard to Hold, and even a kid's cartoon series.  Hailing from Australia, Springfield first picked up the guitar at 13, and formed his first band in high school (called Icy Blues).  After dropping out of high school, Springfield found himself as a member of many different bands as the years went on.  Bands with names like Group X, MPD, Ltd., and Zoot.  It was as a member of the band Rockhouse that he changed his name to Rick Springfield.

The band Zoot, which Springfield joined up with in 1969, was known for their pink outfits, a gimmick which brought them some attention.  Zoot did have a few hits back in the day, including the songs "Hey Pinky", "Freak", and the Beetle's cover "Eleanor Rigby".  Soon after, Zoot broke up, and Springfield was signed to a solo record deal.  He released his first solo album in 1972, called Beginnings, that featured the hit song "Speak to the Sky".  Another hit song to come out of Springfield's 70's career was the song "Take a Hand", which was released on the 1976 album Wait for the Night.  Springfield quickly became a teeny-bopper idol, much like David Cassidy or Leif Garrett.  As the 70's rolled on, he concentrated less on his music career, and more on his acting career.

In 1981, Springfield released the album Working Class Dog, which featured the songs "Jessie's Girl" (no 1 on the charts for 2 weeks) and the Sammy Hagar cover "I've Done Everything for You".  Several more albums followed in the 1980's.  Songs you may remember include "I Get Excited", "Human Touch", and "Don't Talk to Strangers" from 1983's Living in Oz, "Affair of the Heart", "Bop Till You Drop", and "Love Somebody" from 1984's Hard to Hold, and "Celebrate Life" and "State of the Heart" from 1985's Tao.  The song "Love Somebody" was released on the Hard to Hold soundtrack, starring Springfield, in 1984.  Springfield's last album from the 1980's was Rock of Life (1988).  It would be over 10 years later before any new material was released.

Although Rick Springfield's popularity today is not what is used to be, he was still active at the time of this writing in 2012.  The Rick Springfield Discography was as follows: 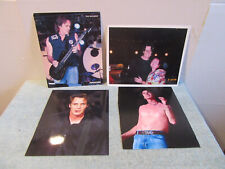