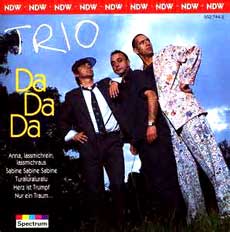 Trio was a German band that formed in 1980.  They were known for the simplistic instrumentation, usually consisting of vocals, drums, guitars, a rare bass, and three chords.  Trio was more popular in Germany than in any other country in the world, however they did leave their mark on 80's music internationally (read on).

In the early 1980's, Trio released their biggest hit to date, and the only song that made it big internationally:  "Da Da Da ich lieb dich nicht du liebst mich nicht aha aha aha", translated as Da Da Da I Don't Love You You Don't Love Me Aha Aha Aha, and typically known by its short name of simply the "Da Da Da" song.  The song had a bit of a resurgence in 1997 when it was featured in a Volkswagen commercial.

Trio broke up in 1985 as all members went on to solo careers.  At the time of this writing, it was unclear whether or not the Trio has any plans for a reunion.  The Trio Discography is as follows: 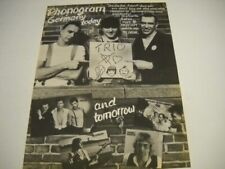 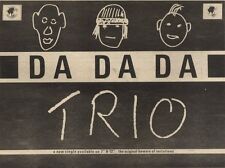 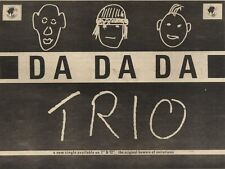