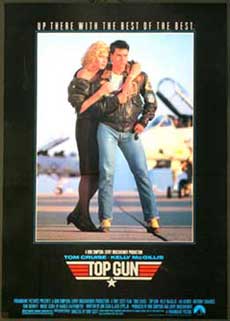 Top Gun was one the most popular movie of 1986, and actually was the impetus for an influx in new Navy and Air Force recruits.  The movie starred Tom Cruise as Lt. Pete "Maverick" Mitchell, Kelly McGillis as Charlotte "Charlie" Blackwood, Val Kilmer as Lt. Tom "Iceman" Kaznsky, and Anthony Edwards as Lt. Nick "Goose" Bradshaw.  Other big names in the movie were Meg Ryan and Tim Robbins.  The movie received mixed reviews from critics.  Still, it was the highest grossing film of 1986, and continues to be one of the most recognized films to come out of the 1980's.

The movie is about rebel Navy fighter pilot Maverick, who is a loose weapon when it comes to his piloting ways.  After a reckless meeting with some foreign MIG fighters, the Navy sends Maverick, and his co-pilot, Goose, to a Navy Jet weapon's training.  Maverick ends up falling for Charlotte, a civilian Top Gun instructor, while at the same time both impressing and aggravating flight instructors with his brash maneuvers and cocky attitude.

During one war game alongside his rival Iceman, Maverick's jet ends up in a flat spin that he and Goose must eject from.  Goose is killed, and considering him to be his only family, Maverick debates quitting the program.  After being convinced to stay by a top notch pilot who flew with Maverick's father in Vietnam, Maverick graduates, and is immediately shipped off to a real war situation.  After some fancy flying and blowing up of enemy MIGs, all is okay in the world.  Not only do Maverick and Iceman end up as friends in the end, but Maverick is given the option to teach at the Top Gun school.  In the end, he gets the girl (again). 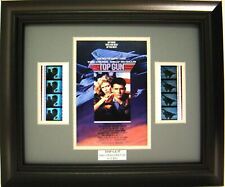 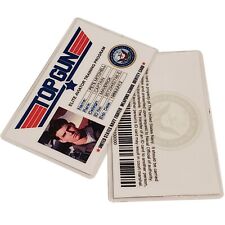 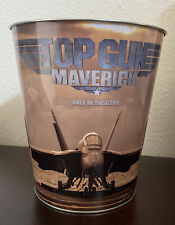 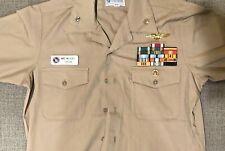