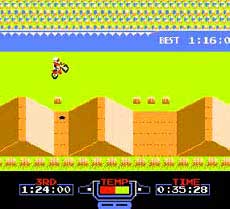 ExciteBike (also known as Excite Bike) was a Nintendo arcade game released in 1984, with an NES launch in 1985.  Vrs. Excitebike was an enhanced arcade version that allowed two players to compete.  This was one of our favorite arcade games, back in the day, and was a relatively easy one to play once you got the hang of it.  In this game, the player would initially race a dirt bike alone on a qualifying stage, over hills, puddles, bumps, hay bales, and other obstacles.  Angle was important in this game, and the joystick was used to not only change lanes (up and down), but also as attitude control (left and right).  Attitude control became important when landing jumps.

Speed was controlled with two buttons.  One button was normal acceleration, and the other was for turbo.  If turbo was pushed too long, the engine would overheat, and the bike would stall.  Special arrow pads on the track could also be run over for a boost of speed.  Once the player qualified in the first stage, the second stage featured the same track, but this time with other racers.  The player continues from level to level as long as they place with a qualifying time.

The NES version was unique in that the player had the ability to build their tracks, and the entire Excitebike namesake was the impetus for a number of remakes such as Excitebike 64, Excitebike World Rally, etc.