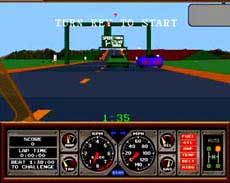 Hard Drivin’, released by Atari in 1989, was one of the most difficult racing simulators we ever played.  Hard Drivin’ was one of the first games to use the 3D polygon architecture, and it was also noted for one of the first to provide tactile feedback to the player.  From a first person perspective, the player was to drive a sports car around a stunt track while avoiding other cars and not crashing off the road.  There were jumps, stunt loops, and banked curves.  If there was an accident, the game would replay the accident scene from a third person perspective.  The arcade cabinet for the game featured a clutch and shifter, and was as true as possible to the driving experience, almost to the point of too realistic (at least insofar as how difficult the game was to master).  If the player made it to the waypoints in time, additional seconds were added to the timer.  Once time ran out, the game was over. 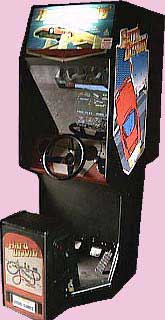 In the early days, the game was developed for home systems like the Sega Genesis, and in later years as part of the Midway Arcade Treasures collection for the Nintendo, PlayStation, and Xbox.  There were a number of sequels to this game as the years went on, including Race Drivin’ (1990) and Hard Drivin’ II – Drive Harder (1991).