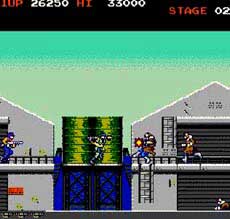 Green Beret, also known as Rush ‘n Attack, was a Konami arcade game released in 1985.  Some of you may even remember the sequel to this game titled M.I.A.: Missing in Action (1989).  In this Cold War era game, the player took control of a Special Ops soldier whose goal was to bust into an enemy military base and rescue POW’s from eminent death.  The game was a left to right scroller with four stages:  a marshalling area, a harbor, the air base, and a camp.  The soldier carried a knife with him, but could also pick up the weapons of fallen enemies, such as a flame thrower, an RPG, and grenades. 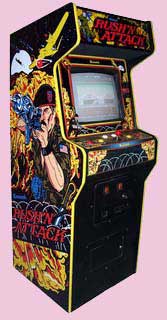 The end of each stage presented the player with a unique set of challenges.  The first stage ended with a truckload of karate soldiers, the second with a pack of killer dogs, the third with shooting helicopters, and the fourth with a skilled enemy flame thrower.  If the player beats the final level, the POW’s are released, and play begins again at level one, albeit at a higher difficulty level.  The player must reach the end of each level before a certain time level is up, and if the player hangs around too long idly, the game would send out a flying jet to take him out.