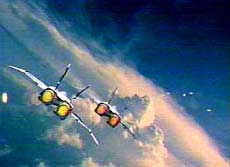 Firefox, released by Atari in 1984, was a laserdisc game similar to Cobra Command and M.A.C.H. 3.  This was Atari’s only foray into the world of Laserdisc, and the system was prone to malfunction.  The game itself was based on the 1982 Clint Eastwood movie (also called Firefox), where Clint goes about the business of stealing a highly advanced Soviet MIG-31 fighter jet called the “Firefox”.  The Firefox was not only capable of Mach 6, but was also impervious to radar and had mentally controlled weapons. 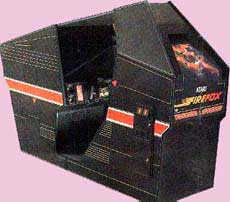 In this game, the player flew the Firefox through varying terrain, blowing up enemy aircraft and blowing up fuel targets.  If the player reached the end of the stage without running out of fuel or getting blown up, they would advance.