Hang On was a Sega game released in 1985, and was a breakthrough in sorts, based both on graphics and interactive gameplay, and for that reason, it cost more than one quarter to play.  There were a number of cabinet versions of this game, the most significant (and expensive) being the cabinet with a full motorcycle mock up, which required the player to lean the motorcycle to steer it.  The tracks were divided into timed stages, and if the player reached a checkpoint in time, additional seconds were added to their gameplay.  If they missed a checkpoint before time was up, the game was over. 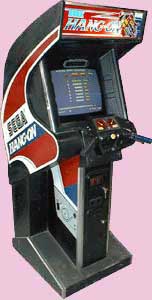 Hang On was a hit in the arcade, and a sequel was released in 1987 (Super Hang On).  In Super Hang On, the player was allowed to choose one of four tracks, each of which contained a number of stages (Africa, Asia, America, Europe).  There was also a turbo button that allowed the player to really go fast once normal top end was reached.  There were a number of other spin-offs of these games released for contemporary consoles like the Xbox.