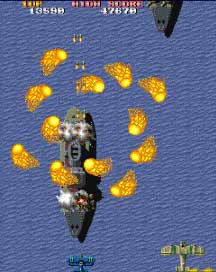 Flying Shark (also known as Sky Shark), released by Taito in 1987, was a scrolling airplane shooter.  There was an earlier, similar game by the same name released in 1977, but we feature the 1987 version here.  In many ways, it was like a cross between Xevious and 1943: The Battle of Midway.  In this game, the player piloted a biplane and went about the business of blowing up enemy aircraft, enemy boats, enemy buildings, and other targets.  Enemy planes would attack in waves, and destroying the wave would give the player power-ups and extra lives.  In addition to the guns, the player also had 3 bombs for each stage (or life).  There were 5 total unique stages, and if the player made it past stage 5, the game would loop.  There were bosses at the end of each level, and reaching the end and destroying the boss would allow the player to advance.

The game was popular enough to warrant a sequel, and Taito released Shark! Shark! Shark! In 1989.  There were a number of home consoles with the game, including the Commodore 64, NES, and Sega Genesis. 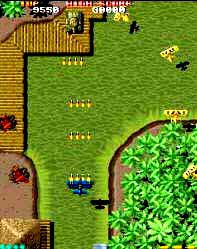