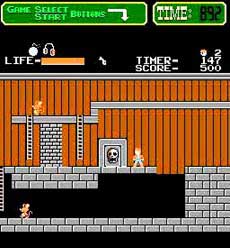 Goonies and Vs The Goonies was an arcade game based on the popular 1985 movie of the same name.  In this game, the player guided the character Mikey through a series of caves to find keys and save his friends who were being held captive by the Fratellis gang.  Mikey not only had to watch out for members of the Fratelli family, but also for mean little colored rats.  The red rats could be killed one with slingshot hit, and the yellow ones with two.  If a white one was killed, it dropped an invulnerability bonus that Mikey could pick up.

In the game, Mikey could use bombs or his slingshot to fight back, and finding diamonds helped to restore his health.  Other bonuses included earmuffs and a fire suit.  The stages of the game follow the movie in that there is a restaurant, caverns, and pirate ship.  Although Jake Fratelli could not be eliminated, he could be stunned, allowing Mikey to escape. 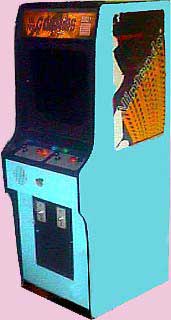 It is our understanding that this game was very rare in the USA, but we remember playing it in our Midwest mall, which was nothing special.  There were versions released for the NES, including an NES only sequel called Goonies II.