Frogger, released by Konami in 1981, was one of the most popular and recognizable games to come of the 1980’s.  Game play was relatively straightforward:  Guide your frog across a busy highway and a fast flowing river.  Fans of the game will remember that the bottom portion of the screen was the highway, which contain contingents of cars, trucks, bulldozers, and motorcycles that the player had to maneuver through.  The top part of the screen contained a river with turtles, logs, snakes, and alligators that the frog would jump on.  All of the obstacles moved on the screen from right to left, and the player used a four-directional joystick to guide the frog to one of five lily pad pockets at the top of the screen before time ran out.  Once all pockets were inhabited by frogs, the player would advance to the next level.  Bonuses were bugs in the lily pad pockets and a lady frog that could be escorted across the river.  As the levels progressed, the highway and river become more perilous. 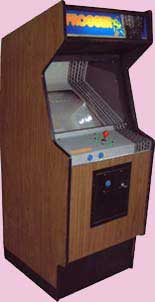 Frogger was such a huge success, it could be found on tons of home consoles, and the Atari 2600 version really wasn’t too bad.  Some of you may have even been fans of the Atari 2600 game by Activision, called Freeway, that was very similar.  There were tons of home console sequels to Frogger for the Xbox, PlayStation, Nintendo, the PC, and so many more.  Frogger was one of the few games to make it to the table top arcade market.