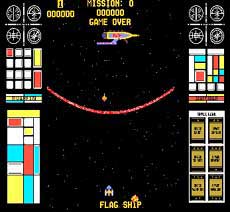 Gorf was a Midway game released in 1981.  The name stood for "Glactic Orbiting Robot Force", and the game was a multi-stage, fixed shooter.  In this game, the player controlled a spaceship that could move up, down, and side to side towards the bottom of the screen.  The player could fire one missile at a time in rapid succession, but only one shot could be on the screen at a time.

Gorf consisted of 5 stages, each with its own enemies.  There was the Astro Battles, Laser Attack, Galaxians, Space Warp, and the Flag Ship stages.  If the player destroyed the entire wave of enemies, they would advance to the next level.  After all 5 stages were defeated, they would start over, but at a higher difficulty level (which increases the players rank from Space Cadet, all the way up to Space Avenger).  You always knew what rank you were by the game's taunting voice, which would say things like "some galactic defender you are, Space Cadet".