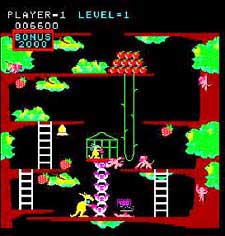 Kangaroo was released by Atari in 1982. The game was essentially a mix between Donkey Kong and Popeye.  The premise of the game was relatively simple.  The player controlled mama Kangaroo, who needed to rescue her son from pink monkeys.  Climbing ladders to reach the tops of the trees, mama Kangaroo would punch her way through the apple throwing monkeys, eating fruit along the way.  Another obstacle was a big ape that would occasionally show up and try to steal mama Kangaroo’s boxing gloves.  There were a total of four levels, each level with a different configuration and becoming increasingly more difficult as the player leveled up.

Kangaroo was popular enough to warrant an Atari 2600 and Atari 5200 version, and in 1984, a Kangaroo cartoon was even created for Saturday mornings (other arcade cartoons of the time included Pitfall Harry, Frogger, and Donkey Kong, Jr).