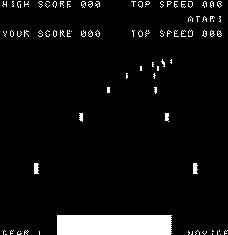 Night Driver was a racing game released by Atari in 1976.  It is believed to be one of the first games from a first person perspective.  By today’s standards, and by the technological standard in place by the early 1980’s, Night Driver had weak graphics.  Nevertheless, in the late 1970’s, the game was very popular in the arcade as it was cutting edge at the time.  In this game, the player would control a car along a windy road at night time.  The screen only showed the outline of the road, and the car was actually a plastic insert on the inside of the screen.  The edge of the road was denoted by roadside reflectors.  The player had a steering wheel, a gas pedal, and a four-gear shifter.  At the start of the game, the player could choose from one of three difficulty levels:  Novice, Pro, and Expert.  Difficult tracks included sharper and more frequent turns, and the roads would become narrower and with more turns as play progressed. 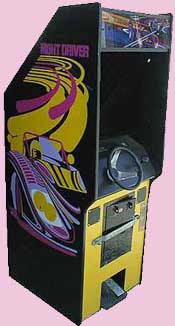 There were a number of home versions of the game created.  In fact, due to the lame limitation of the Atari 2600, its version was actually a close second to the arcade version.  For those of us who owned the Atari 2600 version, you will remember that the paddles were required to play, and that they added some buildings, trees, and other cars.