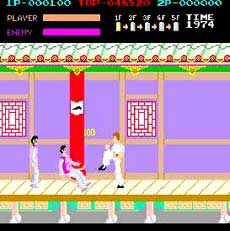 Kung-Fu Master, also known as Spartan X in Japan, was a 1984 arcade game released in the USA by Data East.  The Japanese version of the game was based on a Jackie Chan movie called Wheels on Meals.  In the game, the player assumed the role of Thomas, a Kung-Fu expert whose girlfriend, Sylvia, has been kidnapped by thugs.  Using a joystick and two buttons for punching and kicking, the player would take Thomas through a temple full of enemies.  Enemies included Grippers, which would grab onto Thomas, knife throwers, and Tom Toms.  Other obstacles included falling pots, exploding balls, dragons, dangerous moths, and poisonous snakes. 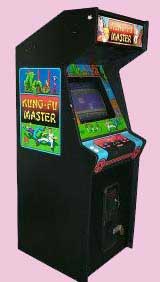 At the end of each level, Thomas would have to battle a boss character.  Once the boss was defeated, Thomas could climb the stairs to the next level of the temple (there were 5 levels).  Each floor had to be completed in a certain amount of time and/or before Thomas ran out of energy.  After all levels were completed, the player would re-start at floor number 1, and gameplay would get increasingly more difficult. 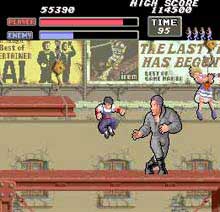 Kung-Fu Master was a very popular game, and ended up being released on tons of home consoles, including the Atari 2600 and Commodore 64.  Our favorite version was that of the NES. We would waste many hours playing the NES when visiting family over the holidays.  It is worth noting that the 1988 game, Vigilante, is essentially a sequel to Kung-Fu Master, with the only real difference being that it takes place in New York City, the gang is a bunch of skinheads, and the girlfriend’s name was Madonna.