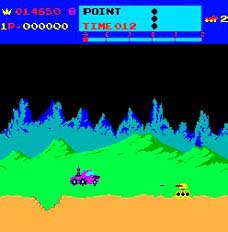 Moon Patrol was created by Irem and distributed by Williams Electronics in the USA (1982).  It was a bit of a breakthrough for arcade gaming in that it was an early version of parallax scrolling, where by the foreground appears to be moving faster than the background, which created the illusion of depth.  In the game, the player controls a lunar buggy through Luna City as a police officer.  This patrol is through Sector 9, considered to be one of the most dangerous sectors in town.  While patrolling Luna City, the officer must jump over craters, avoid boulders, avoid mines, and destroy enemy tanks and UFOs.  There were a number of checkpoints along the way, denoted by the letters of the alphabet, and certain checkpoints became new levels with different backgrounds (denoted by a bar at the top of the screen).  As the checkpoints were reached, the level’s difficulty increased.  There were also indicator lights at the top of the screen that warned the player of aerial attacks, upcoming minefields, or enemies approaching from behind.

Moon Patrol was a very popular game.  Home versions were created for nearly every system available at the time, from the Atari 2600 and ColecoVision, to the Dreamcast, PlayStation, Gameboy and PC on the Midway’s Greatest Arcade Hits compilation.  Those of you rich kids that had an Intellivision will remember their version of this game called “Space Patrol”.  A few of you may even remember an arcade knock-off of Moon Patrol called Moon Ranger, which was also released in 1982.