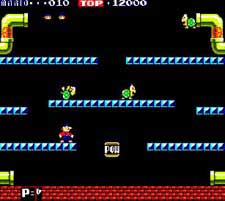 Mario Brothers was developed and released by Nintendo in 1983.  The entire Mario Brothers franchise has been wildly successful for Nintendo, and many people may not even realize the game started out in the arcade.  Many people may not realize that the Mario character was first introduced to the world in Donkey Kong.  In Mario Bros, the player controls one of the two Mario brothers, Mario or Luigi.  As plumbers, they are called upon to investigate strange happenings in the sewers below New York City.  At each level, Mario is expected to defeat all the strange creatures before moving onto the next stage.  Enemies were defeated by kicking them once they were turned over on their backs.  Getting them on their backs was a matter of jumping up and hitting the platforms they were perched on.  There were four types of enemies:  The Shellcreeper, the Sidestepper, the Fighter Fly, and the Slipice.  Each level had a POW block, that when hit, would cause all the enemies to flip over.  As gameplay advances, the game’s difficulty increased as well. 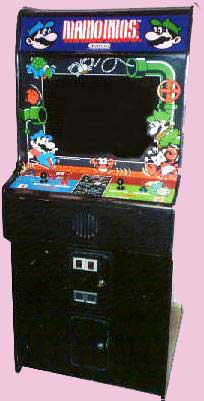 It is well known that the Mario Brothers game took on a life of its own as the years have gone on.  Not only did they create a version for tons of home systems like the Atari 2600 and the Commodore 64, but the Nintendo NES version came bundled with new systems, and it was fun to play.  There have been tons of spin offs created for Nintendo’s line of consoles (Gamecube, Gameboy, and Wii), such as Super Mario Advance, Super Mario World, and many more.