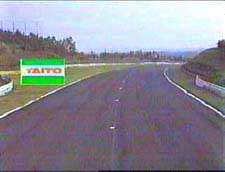 Laser Grand Prix was a racing game released by Taito in 1984.  This game was another Laserdisc game, like FireFox and M.A.C.H. 3, whereby digital animation was transposed over live action footage.  The first stage of the game found the racer trying to qualify for race position by sprinting down a 400 meter straight away.  Pole position on the subsequent race was contingent upon the time achieved in the initial trial.  In the real race, which was essentially a Grand Prix race, the player had 70 seconds to steer through tight curves, downshift properly, avoid other cars, and try to win the race. 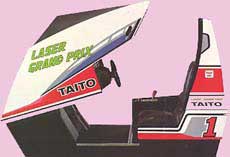