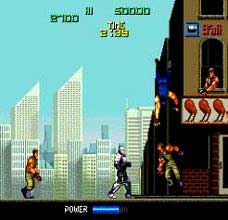 RoboCop was a side scrolling shoot-em up Data East game released in 1988.  The game followed the premise of the 1987 movie of the same name.  The player controlled RoboCop, a cop who was murdered and brought back to life as a super-human cyborg cop.  RoboCop would go about the business of blowing up the bad guys, in addition to criminal bosses from the movie, enemies operating heavy equipment, and even the Enforcement Droid Series 209 (ED-209).  Enemies would come from behind, in front, and from the windows of buildings, and they had a variety of weapons (chainsaws, heavy equipment, knifes, guns, etc.).  After a few stages, the perspective changed to first person, and Robocop would use cross hairs to destroy targets on a shooting range.  Later stages featured elevators where RoboCop would travel to higher levels.  RoboCop’s weapons could be upgraded, and as stages progressed, the enemies and bosses became harder and harder to destroy.

There were a number of sequels to the game, including RoboCop 2 (1991), RoboCop 3 (1993), and other versions released for home consoles like the Sega Mega Drive, Super NES, Gameboy, Android phone OS, Xbox, and more.