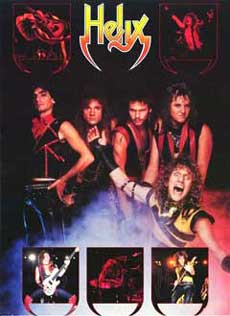 Helix was a Canadian heavy metal band that first formed in 1974 to compete in a Canadian battle of the bands contest.  The original name of the band was "The Helix Field Band".  Their first releases were self produced:  Breaking Loose (1979) and White Lace & Black Leather (1981).

In the early 80's, Helix began working on their metal image after being rejected by Capital Records three times.  By 1983, Capital had signed Helix and they released No Rest for the Wicked under that label.  Some of you may remember the song and video "Heavy Metal Love" from this album.  The album Walkin' the Razor's Edge was their follow up, and it included the songs "Rock You" and "Make Me Do Anything You Want".  Some of you may even remember the MTV video for the song "Gimme Gimme Good Lovin'", which parodied the Miss America contest.  In 1985, Helix released Long Way to Heaven, an album that featured the songs "Deep Cuts the Knife" and "The Kids are all Shakin'".

Back in their heyday, Helix toured with bands like Rush, Night Ranger, Kiss, Quiet Riot, Aerosmith, Motley Crue, and Alice Cooper.  They were a huge hit in some countries in the UK (Sweden, for example), and even had some of their music featured on movie soundtracks (Iron Eagle, for example).

Over the years, the members of Helix changed.  The only original, consistent member of the band was lead vocalist, Brian Vollmer.  In 1992, guitarist Paul Hackman was killed in an auto accident after the band's tour van rolled down a hill in Vancouver.  Helix hired rockers from veteran bands like Killer Dwarfs, Brighton Rock, etc. and continued releasing new materials years after the hair metal days were over.  Nevertheless, original members have reunited from time to time on mega-metal tours like Rocklahoma and to release new material.

At the time of this writing, the Helix Discography was as follows: 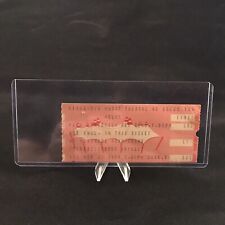 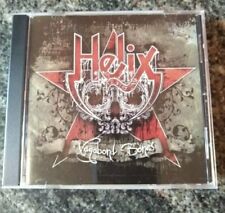 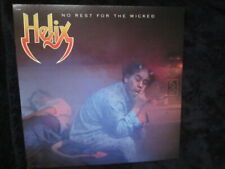 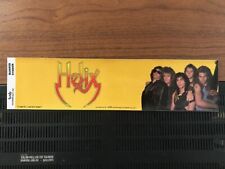 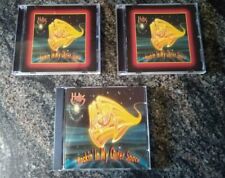 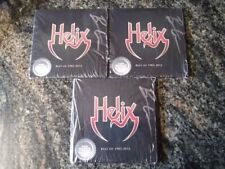