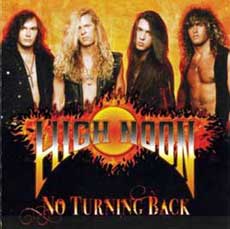 High Noon was a little known metal band formed in 1989 in the Los Angeles Area.  The band played the Southern California tour circuit for a number of years (Gazzarri's, The Whiskey, The Roxy, etc.).  They were the warm up act for bands like Badlands, Babylon A.D., Hurricane, Rhino Bucket, and others.  The band was never signed to a record deal, but they did meet with some success in Europe and Japan.  Some of you may remember their song "Have My Heart", which charted in Belgium in the top 10.

By 1993, High Noon was finished.  Years later, Eonian Records took their 80's recordings and released them as an album titled No Turning Back.  If you are looking for some old school metal from the 80's that is new to you, then check out High Noon.  The High Noon Discography is as follows: