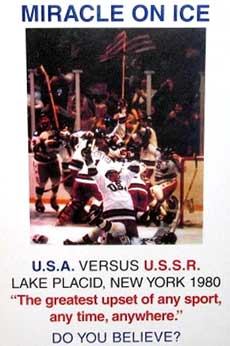 Known by many as the "Miracle on Ice", the Lake Placid, NY 1980 Winter Olympics featured an unexpected upset by Team USA against the Soviet Union national team, which had won the event in six of the last seven Olympic Games.  Although the game was not the gold medal match, Team USA did go on to when Gold by beating Finland.

What made the game such a patriotic event for citizens of the United States was that not only was Team USA considered an underdog, but the game represented, in many ways, the battle between good and evil (Capitalism vs. Communism).  At the time, there was still a significant tension between the USA and the USSR, and Team USA beating the Russians was like a victory over Communism.