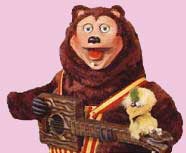 The animatronic pizza arcade first started out as Chuck E. Cheese Pizza Time in 1977 (San Jose, CA).  One of the co-founders of Atari, Nolan Bushnell, convinced Atari to build the restaurant, and after its initial success, Atari sold the restaraunt back to Bushnell, who then went about the business of franchising it.  The Franchise caught the attention of Holiday Inn executive Robert L. Brock, who initially agreed to purchase 280 Chuck E. Cheese franchises.  Brock was made aware of more advanced animatronics coming down the pike, and he became concerned that Chuck E. Cheese would be behind the times from a technology perspective, such Brock decided to make his own chain:  ShowBiz Pizza Place.