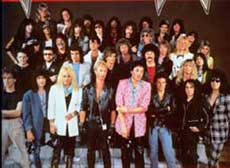 Hear N Aid was another one of those charity efforts meant to raise money to feed hungry folks in Africa.  This time, however, the song was song by heavy metal artists The idea for Hear 'n Aid was hatched by members of Dio after they noticed poor turnout at another charity event they had been invited to.  The Dio members pitched the idea for a new charity idea to the namesake of the band, Ronnie James Dio, in hopes that a metal-based charity might be as successful as Band Aid and We Are the World.

Dio then went about the business of writing the song "Stars", and then getting a tone of metal heads to contribute to the song/video.  Bands represented included Judas Priest, Iron Maiden, Quiet Riot, Dokken, Motley Cure, Twisted Sister, Queensryche, Y&T, Night Ranger, and many more.  Guitar solos were split up between many of the heavy guitar hitters, as was the song's vocals.  The song "Stars" (peaked at 26 on the charts), as well as the compilation album released, went on to raise over $1 million for charity.