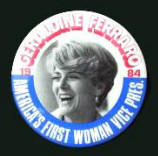 Geraldine Ferraro was a noteworthy 80's figure in that she was the first female vice presidential candidate of either major party.  Ferraro was an attorney and a political figure for the democratic party.  In the late 70's, she began her political career as a member of the House of Representatives for New York's 9th district.  Walter Mondale, running for president in 1984, chose Ferraro as his running mate.  The duo lost to incumbent Ronald Reagan and VP George HW Bush.

After the election, and over the years, Ferraro continued contributing to various democratic political efforts, even serving as United States Ambassador to the United Nations Commission on Human Rights under Bill Clinton.  She died in 2011 from cancer.