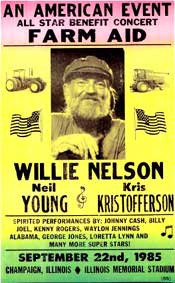 Farm Aid shows were organized by Willie Nelson, John Cougar Mellencamp, and Neil Young to benefit farmers in the USA.  The idea was to help relieve the financial pressure on some farmers who were at risk of losing all they owned due to mounting debt.  At the time of this writing in 2015, the Farm Aid concerts were still in full swing.  There were multiple Farm Aid concerts in the 80's.  The first one was held in 1985 in Champaign, Illinois.  It featured bands like Bon Jovi, Johnny Cash, Foreigner, Don Henley, Alabama, John Denver, Sammy Hagar, Billy Joel, Huey Lewis, Roy Orbison, Tom Petty, Van Halen, Neil Young, and so many more.