Home » pop-culture » History » We Are the World

We Are the World 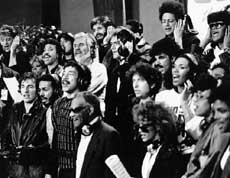 We Are the World was a 1985 charity song performed by a supergroup of 47 artists referring to themselves collectively as USA for Africa.  Sales of the song, and subsequent album, were meant to raise money for hungry people in Africa (there were a lot of hungry people in Africa in the 1980's we guess).  The idea sprung from the success of Live Aid, and the song "We Are the World" was written by Michael Jackson and Lionel Richie.  The album featured songs by artists Steve Perry, Bruce Springsteen, Prince, Chicago, Huey Lewis, Tina Turner, and others.  The album sold over 3 million copies and reached the top of the album charts (Billboard 200) in just 2 weeks, a feat that had previously only been accomplished by the Beatles and the Rolling Stones.