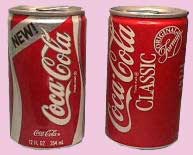 In the mid 80's, Coca-Cola was rapidly losing marketing share to Pepsi-Cola.  After conducting a number of blind taste tests, Coca-Cola executives determined that consumers appeared to prefer Pepsi's sweeter taste.  They reformulated Coke and marketed as the "New Coke" in 1985.  This did not go well with consumers, who complained loudly about the changes.  It did not take long before Coca-Cola realized they had made a mistake, so they also began producing the original formula, and branded it "Coca-Cola Classic".  But was it a mistake after all?  Sales were way up for Coca-Cola after the re-introduction, and the company was accused by many as releasing the new Coke as a marketing gimmick or a way to change the formula.  One theory was that Coke was changing from sugar to corn syrup, and the New Coke was a way from them to reintroduce the original version with corn syrup instead of sugar.