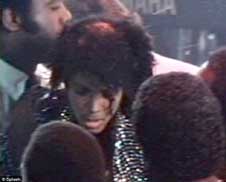 By the mid-80's, Michael Jackson was a huge star.  In 1983, Michael and his brothers signed a $5 million promotional deal with PepsiCo, which was the largest celebrity endorsement to that point.  Michael Jackson was integral in the advertising campaign.  On January 27, 1984, Michael and his brothers filmed the infamous Pepsi Cola commercial where Michael Jackson's hair caught on fire.  In an auditorium full of fans, Michael received second degree burns to his scalp and Pepsi settled his case out of court for $1.5 million.  Evidently there were no bad feelings between Michael and PepsiCo given the fact that Jackson signed a new, $10 million contract with PepsiCo in the late 1980's.  It has been said that the pain killers Jackson took for his scalp injury began the path to his drug addiction and ultimate death in 2009.