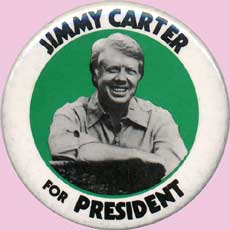 James Earl "Jimmy" Carter, Jr. served as the 39th president of the United States of America from 1977 to 1981.  Carter was a Georgia peanut farmer and served as both a state senator and governor for the great state of Georgia.  Carter won the presidency by defeating Gerald Ford in a very narrow margin, running on the premise that truth was needed in the white house given the recent Watergate scandal.

Some historically notable things that happened during his presidency was the Iran hostage crisis (late 1979), the late 70's U.S. energy crisis, and the boycotting of the 1980 Moscow Olympics due to Russia's invading Afghanistan.  By 1980, Carter's popularity had severely waned, which caused him to lose a second term to Ronald Reagan.  Some have said that Carter was more efficacious post-presidency with his humanitarian efforts than as president.