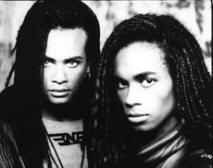 The Milli Vanilli lip syncing scandal was interesting in that it demonstrated how cut throat and devious the music industry could be.  Milli Vanilli was a West-German based top 40 duo that featured Fab Morvan and Rob Pilatus.  They released their first album, Girl you Know It's True, in 1989.  The album was an international success, ultimately earning the duo a Grammy Award for Best New Artist.  However, during a live MTV performance in July of 1989, the duo got busted lip syncing when the song they were singing, "Girl You Know It's True", began to skip.  It eventually came out that Morvan and Pilatus had not provided the vocals for any of the songs on that first album, and their Grammy was revoked.  This resulted in a number of lawsuits with an estimated 10 million people being eligible for some type of monetary remediation.

Milli Vanilli's second album was already well into production while the scandal was being sorted out, and once again the duo had not provided vocals for any of the songs.  In a last minute scramble, execs tried to remove the association with Morvan and Pilatus from that album (titled Keep On Running in the USA and The Moment of Truth in Europe).  Although Morvan and Pilatus attempted to re-boot their careers by actually singing the next time, it never really worked out for either of them.