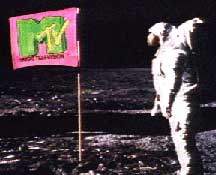 MTV (Music Television) was a product of the 1980's.  It launched in August of 1981, forever changing the music industry.  The channel was initially created to play music videos, 24 hours per day, 7 days per week, and was hosted by video disc jockeys (VJs).  The original VJs were Nina Blackwood, Mark Goodman, Alan Hunter, JJ Jackson, and Martha Quinn.  The idea for music videos was not new.  The Beatles had been creating music videos to promote their records since the 1960's.  The first video to play MTV was appropriately titled "Video Killed the Radio Star" by the band The Buggles.  "You Better Run" by Pat Benetar was next, and the rest is history.  Local music stores began selling albums that local radio stations were not spinning, including many bands from Great Britain.  As musical tastes changed, MTV created segment shows that appealed to specific audiences, such as Headbanger's Ball for metal heads, MTV Unplugged for the lighter music lovers, and Yo! MTV Raps for hip hop lovers.