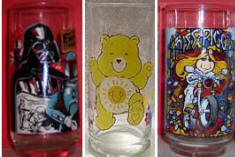 For some strange reason, in the 1970's and 1980's, it was not unusual for fast food restaurants  to give away (or sell) trinkets that seem strange in retrospect.  Although you will still occasionally find a fast food joint giving away something strange from time to time, the items are typically toy-trinkets relegated to the kid's meal.  Of course the 80's had its fair share of period-specific happy meal toys, but the 80's also had something you don't see much of these days:  promotional drinking glasses. From Star Wars at Burger King, the Muppets at McDonalds, and the Care Bears at Pizza Hut, the idea was to collect an entire set.  And if you broke one, you were screwed.  The restaurant would generally sell a single glass for a nominal amount after you ordered something off the menu.  The sad fact is that the majority of us never completed the set.  Sadder still is the fact that your parent's probably still have at least one of these glasses stuffed on the very back shelf.  They were too cute to throw away.