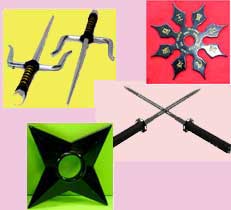 For whatever reason, ninja gear was hot in the 1980's.  Nunchakus, Chinese stars, and butterfly knives could be purchased in the mall.  To add insult to injury, bringing a Chinese throwing star to school in the 80's typically meant it was confiscated until the end of the day, or at the very most, the end of the year.  Bring something like that to school these days and they call in the S.W.A.T. team (especially in countries like Germany, Belgium, Canada and states like California, Indiana, and New York).  The Chinese stars were the most popular Ninja gear to own, and they came in various shapes and sizes, just like they did back in the olden days.  In reality, they were a Japanese weapon called a "shuriken", which translated means "sword hidden in user's hand".  Mostly those of us who owned one in the 1980's just looked at it, but they were legitimate weapons that were used in a variety of ways to inflict pain on the enemy.