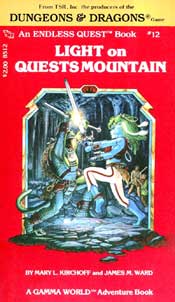 Dungeons & Dragons (D & D) is a fantasy, role playing game first published in 1974.  Advanced Dungeons & Dragons (more rules) was released in 1977.  In both games, each player is assigned a specific character, such as a dwarf, warrior or a wizard, and that character then embarks on imaginary adventures as told by the Dungeon Master.  The person who takes the role of Dungeon Master is responsible for referring the action, reading the stories, and playing the role of the inhabitants of the fantasy land.  As characters solve problems and battle creatures, they earn experience points, which make the character more and more powerful in subsequent game sessions.

The popularity of Dungeons & Dragons peaked somewhere in the mid 1980's, although it is still sold today.  It made news around 1985 because people began connecting the game to a rash of suicides and murders.  It was believed by some that assuming the imaginary role of a powerful character in D & D caused the player to transfer fantasy into reality.  It was found that a number of those who killed themselves, or others, were addicted to Dungeons and Dragons.  But given that there were 3 to 4 million D & D players in 1985, a few weirdos was not really that statistically significant.