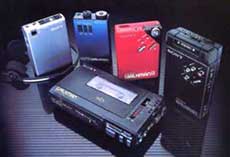 The first portable audio cassette players were created by Sony in the late 1970's.  The idea for the first Walkman came from a Sony executive who wanted to be able to listen to operas during trans-pacific plane trips.  It was first introduced in Japan in 1979, and then in the rest of the world in 1980 as a device called the Soundabout, Freestyle, or Stowaway (depending on what country you were from).  The Walkman name is the name that stuck, and the Walkman became a breakthrough for music listeners.  People could now take their music with them and listen to it through lightweight earphones without bothering anybody else.  As the Walkman took off, so did competition, and before long Toshiba, Aiwa, and Panasonic all had their own versions.  Eventually the technology became obsolete as the CD Discmans became popular.